Skip to Content
Home / BLOG / News / Why get Married now rather than later? 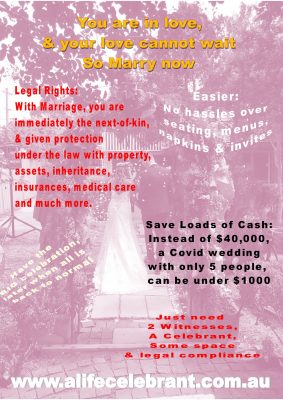 Why get Married now rather than later?

There is so much uncertainty and confusion, and so many contradictions in information being provided from all sorts of directions. I am going to try to clear some of that confusion when it comes to weddings.

The four most important reasons to marry now rather than later are:

Some couples have postponed their marriage ceremonies, but others will marry NOW but will still have their originally planned large celebration on their first anniversary with a Celebration of Marriage Ceremony/Renewal of Vows.

So, to put it simply, all you need to get married NOW is:

So as a Celebrant, and not a lawyer, I am going to try to answer 6 more important questions about marriage, and perhaps you can decide for yourself: Should I Get Married Now?

I am a Refugee from Ukraine. I don’t have a birth certificate or passport as these were taken from me when I left Ukraine as a refugee over 30 years ago and I no longer have my original travel documents issued to me by Australia; only a drivers’ licence, so how do I prove my date of birth and identity?

About your very balanced views about SSM.

A Love that lasts